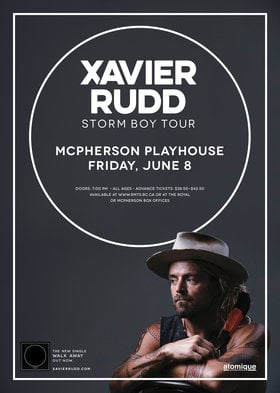 Music: Pop / Rock / Indie
Looking back over Xavier Rudd's stunning career, one could easily ask what is possibly left for him to achieve. Already one of Australian music's all-time greats, he has touched people's lives worldwide. He has earned accolades of every kind, Gold and Platinum certification, and legions of fans who love him with an inextinguishable passion. Yet, with each new release, Xavier Rudd continues to surpass expectation and produce his finest work to date.

Storm Boy, Xavier's ninth studio album, continues this upwards trajectory. Led by the radiating single Walk Away, Storm Boy is both classic Xavier and something a little new. Produced by Chris Bond (Ben Howard, Tom Speight) and mixed by Tim Palmer (Pearl Jam, Bowie, U2) it is a record that reflects how sophisticated a songwriter Xavier is – both in his timeless, philosophical lyrics and his masterful sculpting of melody. He is undoubtedly a true virtuoso of his craft.

Beginning his career with 2002's definitive To Let, Xavier Rudd put his message out into the world and was answered immediately. Fans from all over the globe were drawn to the distinctly Australian-looking musician, activist and surfer. It was the start of a journey that would span well over 15 years (and counting); taking Xavier to almost every continent on the planet, where he has connected with people from all cultures and walks of life. There are no borders that apply to Xavier Rudd's music.

His earliest live format was a wonderful spectacle, placing Xavier inside a forest of yidakis (didgeridoos) from which he dexterously crafted layers of guitar, percussion, blues harp and vocals. He was distinct, unique and unforgettable. Since then he has played in a variety of solo and band formats, each with an unmistakable personality of its own. The further the ripples of his career reached, the bigger the wave got. Australia was the first to fall in love with Xavier. Then it was Europe. Then it was North America. The snowball kept rolling.

As his popularity grew worldwide, so too did Xavier's musical palette. Each new record, always accompanied by breathtaking singles, gave his fans everything they wanted and more. In return, ARIA nominations, chart placings and Gold and Platinum records honoured each release, spurring Xavier even further and producing a stellar discography: To Let (2002), Solace (2004), Food In The Belly (2005), White Moth (2007), Dark Shades Of Blue (2008), Koonyum Sun (2010), Spirit Bird (2012), and his first album with The United Nations, Nanna (2015).

This alone would be impressive enough, but in that time Xavier has also released eight live albums, recorded around the world in Canada, The Netherlands, Brussels, and different parts of Australia. Each live album is an essential snapshot of a moment in Xavier's career, documenting his path and commemorating the bond he shares with his fans.

But in spite of all his success, Xavier Rudd has never stopped working. He has continued to tour the world and make incredible records – showing absolutely no desire to rest on his considerable achievements. He truly loves his fans and feels constantly blessed to be able to perform in countries all across our beautiful planet. He has inspired thousands of people and been the catalyst for others to find their own voice. He is helping his own country to reconcile its past, and he is beloved as both an icon and a human being.