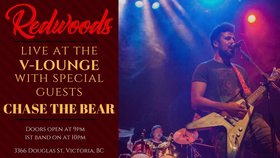 Music: Pop / Rock / Indie
Come out for a night of live music hosted by Victoria’s V-Lounge at the Red Lion Inn. Local band Chase the Bear will be sharing the stage with Redwoods, from Vancouver BC. Tickets are $10 and will be sold at the door. Talk to the artists for presale.

Chase The Bear draw inspiration anywhere from the harmonious pop-sensibilities of The Beatles, to the groovy hard-hitting groove of Led Zeppelin, and various elements of funk, sould, and modern rock.

other sites:
Redwoods is a Canadian rock band from Vancouver B.C. The four-piece was formed in early 2012, and consists of three singers, two guitarists, a bass player and a drummer. Determined to keep the modern day rock scene alive, the band writes and performs their own original music, from intricate melodies to straight ahead, driving rock and roll. more info
Submit info on this show to our admins