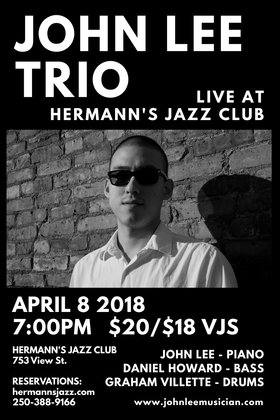 Music: Jazz / Blues
Multi-instrumentalist and composer John Lee brings his trio to Hermann’s Jazz Club for a night of vigorous energy and creativity. The repertoire of this particular concert will heavily consist of original compositions by the band leader as well as contemporary interpretations of timeless jazz classics. This trio will be performing at the upcoming TD Victoria International Jazz Festival in June 2018.

Watch the recent video release of the JOHN LEE TRIO called “ONE TAKE SESSION” at the following YouTube link: https://youtu.be/gpQv8PgyIJY