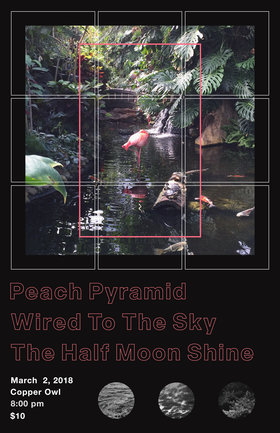 Event Archive - .: Peach Pyramid, Wired to the Sky, The Half Moon Shine

Peach Pyramid is the brimming honesty and personal experience of one Jen Severtson. An internalized cry pulled to the surface; transformed and juxtaposed by way of graceful melodies and swirling guitars. Based in serene Victoria, British Columbia, the group explores the sounds of the pacific northwest while nodding at Jen’s upbringing in Calgary, Alberta. Repeating Myself, Peach Pyramid’s newest release, is a project recorded and produced with engineer Colin Stewart (Dan Mangan, Black Mountain, Yukon Blonde) and Kathryn Calder (The New Pornographers, Immaculate Machine) released Sept. 22nd on Calder’s newest label, Oscar St. Records. Repeating Myself explores themes of abuse and healing, glued together by Severtson’s ethereal vocals and pop hooks; Repeating Myself dives deep into the great beyond. Supported by a rotating collective of musicians/close friends, Peach Pyramid sonically exhales Jen’s intimate narrative.

Wired To The Sky
https://wiredtothesky.bandcamp.com/

Wired To The Sky is the always evolving solo project of Canadian songwriter, Dylan Perkons. After relocating from Montreal to the West Coast he began performing new material, frequently collaborating with a rotating cast of Vancouver Island musicians. In late 2016 the band entered the studio to record their debut album, produced by Juno Award-winner Colin Stewart (Dan Mangan, Black Mountain, Yukon Blonde). The upcoming 2017 release, titled Steady Sparrow, Steady Flight finds Perkons' residing comfortably in a post-Americana landscape. Though his dusty baritone remains at the front and center of the album, the dynamic arrangements carry the listener through the songs. The album features contributions from Pat McTaggart, Dave Thompson, Kathryn Calder, Laura Mitic, Marc Jenkins, Nevada Brown, Michael Lewis and Megan McCaffrey. Swaying between colorful indie folk and eerie country-noir, the music compliments the earnest writing woven throughout the songs.

The Half Moon Shine
https://thehalfmoonshine.bandcamp.com/releases

The Half Moon Shine is a band of women from Victoria, BC, initially bound together by their love of sweet country harmonies. Since they formed in 2015 as a good old-fashioned all-female country band, it’s been all-hands-on-deck. Each gal is a songwriter in her own right and from the get-go they were delighted to hear and share each other’s songs and flesh them out with luscious four-part harmonies, guitar riffs, and train beats. As the songs tumbled out, the country faded into the background, and their honest sound shifted into the light. Drawing on everything from classic doo-wop, spaghetti western, folk and surf rock, they couldn’t learn the songs as fast as they could write them. Bret Enemark (Carousels, Snoqualmie), Jocelyne Van Horn-Foy (Carousels, Running Water), Julia Knight (Bucan Bucan, Julia and the Spectacles, Aidan Knight), and Tanya Semple (Elder Sister Plum) are the four voices, guitars, bass, drums, and trumpets of this collective. Their live shows have a heavy dose of endearing banter, a juggling act of trading instruments and magically appearing trumpets, and all the sweet harmonies you could ask for. They don’t shy away from some heavy emotions on stage, but their positivity, love, and support for each other shines through. With each live performance, these women welcome you into their worlds of whiskey, adventure, and heartbreak, allowing you to find yourself within the stories they share.

The Half Moon Shine (Alt-country/doo-wop/surf rock)

When these four gals hit the stage, expect a heavy dose of endearing banter, a juggling act of trading instruments and magically appearing trumpets, and all the sweet harmonies you could ask for. They dance between genres from alt-country train beats, to classic doo-wop vocals, and twangy spaghetti western guitars, but the songs at their core are a... more info
Submit info on this show to our admins