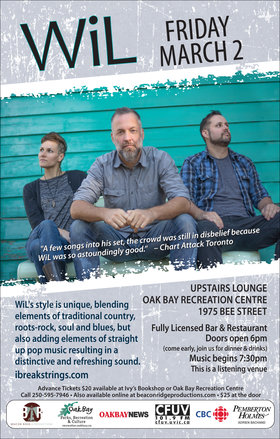 Music: Pop / Rock / Indie
William Mimnaugh (aka WiL) is a Canadian singer songwriter who performs music within the Americana (roots rock) tradition. He is best known for penning songs like 'Roam', flagship anthem to Travel Alberta's stunning ad campaign called 'Remember to Breathe'. He is known for his delicate beautiful songs, but live, he destroys the stage with the attitude and vigour"... possessing a very particular performance style; one that comes with experience; on and off the road. WiL delivers his eclectic brand of contemporary roots inspired rock with band mates Keith Gallant (drums) and Lena Birtwistle (keys/vocals).

His music style is unique, blending elements of traditional country, roots-rock, soul and blues like many ‘Americana’ artists yet he defies the expansive genre, ever so slightly, by adding elements of straight up pop music resulting in a distinctive and refreshing sound. He first hit the scene in 2003 with his debut release 'Both Hands'. Nominated for three WCMA's including Best Live Act, the album launched his career path as a touring singer/songwriter.

Advance tickets $20 at Ivy's Bookshop, Oak Bay Recreation Centre reception and online at http://www.beaconridgeproductions.com
They are $25 at the door

The Upstairs Lounge at Oak Bay Recreation Centre, is a licensed restaurant, doors open at 6 pm for dinner service, the concert starts at 7:30 pm