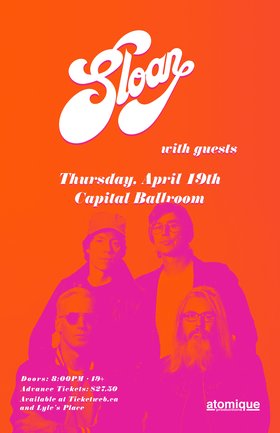 Event Archive - An Evening With: Sloan

Music: Pop / Rock / Indie, Punk / Metal / Hardcore
Sloan is without doubt the most truly democratic group in the annals of rock, with Jay Ferguson, Chris Murphy, Patrick Pentland, and Andrew Scott all contributing original compositions to each record, equal partners with equal say over every aspect of their work. Commonwealth – their first all-new release in three years – sees the Toronto-based quartet disassociating ever so slightly to create one of the more unique and ambitious recordings of their two-decade-plus career, an old-school double album with each member staking out a single side as their own artistic dominion.

"I think that perhaps we are one of the few bands that could make an LP like this," says Ferguson. "Everyone could probably make their own solo LP if they wanted."

"Name another," says Murphy. "The only act that comes to mind with equally recognizable/regarded members who all write and are capable of taking the lead vocals would have been the Beastie Boys but alas…"

Concept-driven works are nothing new to Sloan. Over the course of 10 albums and more than 30 singles – not to mention multiple EPs, hits and rarities collections, live albums and official bootlegs released, like all the band's work, on their own independent label, Murderecords – the band has tackled countless creative conceits from hardcore punk 7-inches to kaleidoscopic song cycles like 2006's 30-track Yep Roc debut, Never Hear The End Of It.

Sloan was one of the most successful Canadian bands of the '90s, which was both a blessing and a curse. While they were well-known in their homeland, where their Beatlesque power pop became a radio staple, they had a difficult time breaking into the American market, especially after their label, DGC, decided not to market their hooky pop in the wak... more info
Submit info on this show to our admins