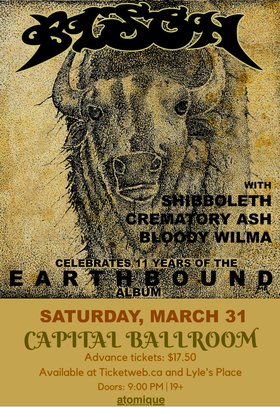 Music: Pop / Rock / Indie, Punk / Metal / Hardcore
In the great Canadian spirit of loss and heart ache, the downer foursome known as BISON b.c. have managed to scourge their rotting brains desperately puking out new psalms of suffering. Akin to a lunatic writing their opus on the bedroom wall with their own shit comes this strange noise from the west coast melting pot of shit and failure; in a country based on terrifying distance and lonesome, stoic suffering. Lovelessness does not portray the death of love or the lack of the same. Rather it attempts to map out the pathetic and desperate pursuit of love, which in itself becomes violent like a cancer, an assault on anything that is good in the world. A heartfelt repulsion towards anything that could bring pleasure, because with happiness we suffer truly – the wanting of more. Gluttons! Pigs to the trough! Lead us to treachery! Lead us to solitude!

BISON b.c. worked with acclaimed producer Sanford Parker at Soma and Electrical Audio Studios in Chicago to record Lovelessness. Parker is best known for his work with bands such as Yob, Pelican, Rwake, Yakuza, Nachtmystium, Zoroaster, Unearthly Trance, and more. Needless to say, Parker is more than qualified to put-to-tape the raw, furious energy that is BISON b.c.

Crushing. more info
Articles: Things Are Getting Hairy: Bison BC prepares for Dark Ages, Bison BC: Wendigo 2010, Bison BC Tour into Europe, Bison BC- Quiet Earth, BISON: Locking Horns with Blades of Metal, BISON HAVE HORNS

bad bunny. more info
Submit info on this show to our admins