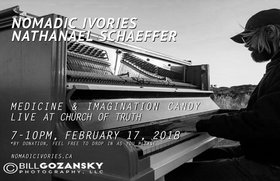 Music: Classical, Folk / Celtic / Latin / World, Jazz / Blues, Pop / Rock / Indie
I wish to grow this show every month over this winter.
For February version I picked the Saturday after Valentines Day so you can come and go as you wish around your dinner reservation.

This write up was in the Times Colonist prior to the January version of this show.

"Why: There’s a lot to like about this night of soothing piano music, in part because of the location. The natural acoustics in the Church of Truth on Superior Street are among the best in the city, which will nicely accent the work of Canadian composer Nathanael Schaeffer. He’s often associated with the term “nomadic ivories,” which may or may not have to do with his tour itinerary. By all reports, be prepared for a journey of the mind on this night."

Bio:
A half decade ago, after a youth full of a
love, hate musical journey of lessons,
a series of life changing events led Nathanael
to realise his life purpose.
Since then he has shifted from inwardly
developing as a being, with music in and out of focus,
to being dedicated into giving his gift of music to the world.
From the humbling streets, to remote forests
and beaches, to the fanciest of keys;
sharing with the homeless, those with stockpiles,
and everyone in between;
he moves forward, growing, hunting pianos
with a guitar slung over his shoulder.
Composing and performing, problem solving;
how to step and thrive while truly dedicated
to living an art form in todays society,
he follows the path.
A carefully sculpted trail of a nomad leaves a resonance.
Rooted in raw, bare, homely foundations
an infrastructure sprouts;
a colourfully, textured vibration
​of medicine and imagination candy. http://www.nomadicivories.ca

medicine for the body and soul, candy for the imagination. more info
Submit info on this show to our admins