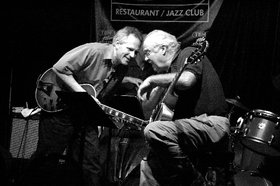 Music: Jazz / Blues
Interplay and communication is what Oliver Gannon and Bill Coon are all about as they play off each other and have a great time doing it!

The band’s critically acclaimed debut CD Two Much Guitar showcases the sparks that fly between these two guitarists and the conversational quality and intimacy the duo achieves in a live setting. Recently Two Much More! (Cellar Live June 2015) has received even more favourable reviews as the band just keeps evolving.

With a swinging style and warm rich sound, Vancouver-based jazz guitarist Oliver Gannon is a masterful musician who plays in the tradition of the great Wes Montgomery. Hailed as the “king” of Canadian jazz guitar, he has performed and recorded with legends like Ed Bickert, Ian McDougall, and Fraser MacPherson.The duo features also the brilliant... more info
Submit info on this show to our admins