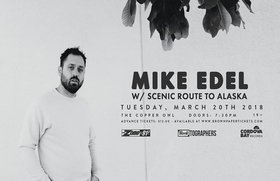 Mike Edel - http://www.mikeedel.com
Edel has entrusted his finest work yet to producer Chris Walla (Death Cab For Cutie) as Walla travlled from his home in Norway after he heard the demos Edel was working on for more than 12 months. The two, along with a tight supporting cast have made lots of music to be excited about.

On the heels of 150 shows supporting Edel’s last release India, Seattle, and shows with Serena Ryder, Foy Vance and Said The Whale, Edel has written and demoed tirelessly while taking time off the road. This time as seen him get married as well as split his time between British Columbia and Seattle, where his wife calls home. 2018 has lots in store and this is just the beginning.

The easygoing Edmonton-based trio, comprised of Trevor Mann on lead vocals and guitar, drummer Shea Connor, and bassist Murray Wood, weaves catchy vocals and memorable melodies through rich arrangements – instantly engaging but begging to be heard again and again. It’s a coveted combination within the crowded sphere of indie rock – and one that’s rarely the product of anything but time, talent, and heaps of hard work. Of course, Scenic Route to Alaska are no strangers to any of those.