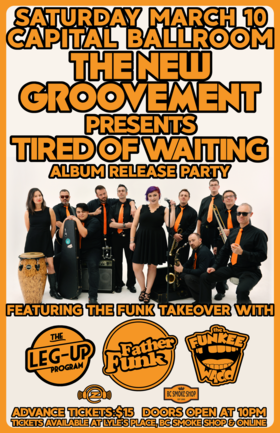 Music: Electronic / DJ, Funk / R&B, Hip Hop / Rap, Reggae / Ska / Dub
The New Groovement are thrilled to announce the release of our new 5 track EP, 'Tired of Waiting'. Featuring sultry singing, clever raps, vibrant horns, and the catchy, danceable sound that has become synonymous with The New Groovement, 'Tired of Waiting' is guaranteed to get you moving. To celebrate the release of this project, we are hosting a Funk Takeover at Capital Ballroom featuring some of the funkiest DJs from around the world and one of the only bands in town even bigger than we are! The 'Tired of Waiting' Album Release Funk Takeover is presented by The Zone at 91.3 with support from BC Smoke Shop.

Advance tickets $15 - available at Lyle's Place, BC Smoke Shop and online at http://www.tiredofwaiting.brownpapertickets.com

What happens when you mix sweet R&B and sultry soul together with a splash of hip-hop, and then add a generous helping of funk? You get a genre-bending mash-up of the funkiest, hard-groovin’, booty-shaking dance music that is The New Groovement. Eleven members work their collective magic to create the group’s powerhouse sound. At the forefront of the band is the radiant Steph Wisla with her beautifully commanding voice, and Danimal, her ever-clever partner-in-rhyme, spittin’ both playful and poignant rap lyrics. Funky rhythms get you on your feet while the big-band style horn section raises the roof with their jazzy licks and uber groovy dance moves. With the New Groovement it’s not just a band - it’s an experience!

The New Groovement has made their mark on BC’s music scene, having been nominated for Urban Artist of the Year at the Western Canadian Music Awards, winning Album of the Year at the Vancouver Island Music Awards, and opening for acclaimed acts such as Booker T. Jones and Five Alarm Funk. They are found regularly wowing crowds at the region’s biggest festivals and touring Western Canada, and have reached the Top 30 charts of campus and commercial radio stations across Canada (including being selected as The Zone band-of-the-month in Victoria). The band finished their first full-length studio album (The Orange Album) in 2015 with exciting new material to be released in the spring of 2018.

FATHER FUNK
Lost in Michael Jackson’s woodland estate young Will Williamson was a happy soul, breast fed and reared by a family of disco Llamas, he’d canter hither and tither to his heart’s content, chewing on the lush grass and shrubs planted way back in the Motown days.

Until the day the bulldozers arrived to clear the estate and mine the fabled Tree of Soul. Outraged, the Llamas quickly militarised and Will found himself leading the Llama army against the machines. Sadly for Will and the Llamas, they were trained in combat by Bubbles, Michael Jackson’s favourite monkey and could only offer thrown semen and faeces against their metal foe and it was over as soon as it began. But as is the way with super heroes, Will didn’t die. He was spirited away and placed in a montage, where over the years he grew strong, running along beaches and up and down steps to Bill Conti’s Theme from Rocky.

Ladies and Gentlemen. Father Funk is here! The Legend is born!

His formula for dance floor destruction includes energetic DJ sets and productions crammed with big bass, big beats and the biggest, funkiest samples sucked from the green sweetness of his youthful Llama days. He’s supported some of the biggest names in Breaks and Ghetto Funk and topped the Juno Breakbeat charts – also crashing his way onto the Juno Best of 2013 reggae chart with his remix of Cedar Seniors “Funk I’m Kickin”.

Harnessing all his production skills he spent 2013 blowing the back doors off the festival circuit with appearances at Sunrise, Beatherder, Solfest and Kendal Calling. 2014 has seen Father Funk release his debut EP on Ghetto Funk to widespread acclaim and once again topping the Juno Breakbeat charts.

Raised by Llamas in the garden of funk and soul, attacked by machines, taught by monkeys, a Rocky montage and he’s still only 20 years old! Father Funk is a superhero. Big with the bass and big with the beats, he’s one of the Ghetto Funk scene’s sharpest up and coming talents

THE LEG UP PROGRAM
A BIG band bringing back BIG sound with horns, percussion, and an onslaught of talented vocalists & musicians. This 17-piece original Funk, Soul, RnB Orchestra comes straight out of Victoria sounding like Motown meets Roots meets the Golden Age of Hip Hop. At times, they are a soul band with raspy lead vocals and beautifully sculpted harmonies; at times, they are a funk band with a wild horn section and groovy bass and drums; at times they are a hip hop group with catchy hooks and heavy beats; and at times, they are sweet and sultry, keeping the audience lit up with the sweetest of ballads. This group simply loves to make music and making people move! It's safe to say, this band does it all—the danciest party you ever dance-partied!

The Funkee Wadd, born of an extraordinary man deemed Montgomery, and an angelic being by the name Of Mary-Helen, he has come to the western coast of British Columbia to bring one thing, and one thing only, Bass. With a focus on the funk and breaks, he is no stranger to elevating a dance floor with the likes of jungle, fist pumping electro, sexy jacking house, soulful bass music, the glitchiest of glitch hop and anything else that may cause a booty popping effect or head banging tendencies. The Funkee Wadd has had the privilege of sharing the stage with many acts such as The Funk Hunters, Stickybuds, Mat The Alien, JFB, Souls Of Mischief, Slynk, A Skillz, SkiiTour, Father Funk, WBBL, Featurecast, and many, many other talented individuals. For the past 2 years, The Funkee Wadd headed to England to play the Ghetto Funk Shindig Weekender, as well as perform at many festivals around Alberta and BC, such as Center Of Gravity, Elecric Love Music Festival, Tall Tree Music Festival, Astral Harvest, Shambhala, Atmosphere, and many more. The Funkee Wadd and his golden(Steel) Harmonica are known for causing a dance floor to get all types of wiggly, and will always make sure you leave the floor weak in the knees and fiending for more.

The Funkee Wadd, born of an extraordinary man deemed Montgomery, and an angelic being by the name Of Mary-Helen, he has come to the western coast of British Columbia to bring one thing, and one thing only, Bass. With a main focus on The Funk and Breaks, he is no stranger to elevating a dance floor with the likes of Jungle, Fist Pumping Electro, Sex... more info
Submit info on this show to our admins