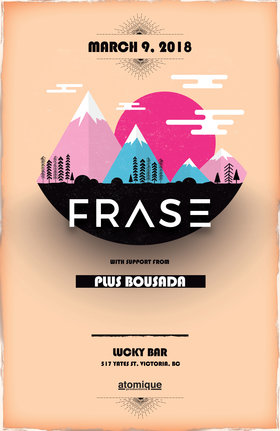 Music: Electronic / DJ, Funk / R&B, Hip Hop / Rap
FRASE is a singer, multi-instrumentalist and producer originally from Montreal and is currently residing in the Nelson region of BC. As a solo artist FRASE has been busy touring Internationally since 2015, throughout India, Europe, Australia, Jamaica & North America, fine tuning his live show and building a fan base each step of the way.

He has supported and shared the stage with such artists as: Dub Fx, Bonobo, Fat Boy Slim, Noisia, Moontricks, Chali 2na and many more.

Just one year since he moved west FRASE has taken the west coast scene by storm. Supporting Moontricks on their 17 show winter 2017 tour and then in the summer FRASE played festivals all over BC Including : Shambhala, Tall Tree, Kamp, Blessed Coast, Starbelly Jam, Unity, Atmosphere, & Kaslo Jazz.

FRASE's sound is organic and dynamic, up-beat and danceable while remaining intimate, because it's got depth. By blending the classic sounds of Soul, Hip-Hop, Dub-Reggae and Blues with the modern dance floor flavours of House and Bass music, FRASE pulls from the retro while pushing to the future. His productions are always locked in with a deep pocket and compelling backbeat. Live FRASE supplements these instrumental layers with a seamless integration of ‘tech’, resulting in a full, contemporary sound, in which his roots and inspirations never take a back seat to his technology. Because on top of it all FRASE is a soul singer, a great songwriter and performer. His lyrics are beautifully crafted and are sung with a unique and memorable voice and delicate vocal delivery.

With authenticity and lyrical finesse, FRASE's voice blends the classic sounds of Soul, Hip-Hop, Dub and pairs it with the modern production styles of House and Bass music. Since the debut EP “Daggers & Shields” in 2015, he has captured the hearts of music lovers around the world with a sound that is analog and soulful, yet pushes to the futu... more info

BOUSADA is one of the most intriguing artists on the West Coast right now. Ottawa-born, Graeme Bousada has travelled from coast to coast, working the land, building community activism and absorbing culture from all over Canada. After honing his skills on the guitar for many years, BOUSADA began drawing influence from the world of electronic music. ... more info
Submit info on this show to our admins