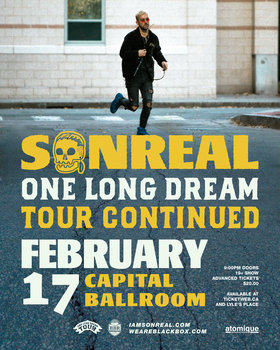 Music: Hip Hop / Rap
Flanked by a squad of quirky characters unafraid to rock bowl cuts and mustaches, spitting bars like nobody’s business, and melting hearts left and right, SonReal would be just as at home in a Wes Anderson or Farrelly Brothers movie as he is behind a mic. Hip-hop has never seen a maestro quite like the Canadian-born rapper, singer, and songwriter. That’s why he’s already earned multiple Canadian Juno Award nominations including “Rap Recording of the Year” for Everywhere We Go in 2014, racked up millions of Spotify streams and YouTube views, and packed shows all over the continent. However, his story begins in the town of Vernon.

Growing up, he’d watch his father sing and play country songs on an acoustic guitar with rapt attention. By high school, he started frequenting the local skate park, and became infatuated with the lifestyle of music and skateboarding. At the time, his musical tastes spanned everything from Guns N’ Roses to Green Day, but listening to Nas’s Illmatic and Mobb Deep’s The Infamous resonate through the park would change his life.

“As a kid from a small town, I loved hearing stories of these artists from Queensbridge and Brooklyn,” he says. “It was like listening to an exciting movie play out. That made me want to rap.”

Following high school, SonReal spent his days working as a carpenter and his nights writing and recording countless songs at home. Quietly and diligently honing his skills, he released a series of buzzing mixtapes beginning with Where’s Waldo in 2011 and followed by Words I Said and Good News just a year later. Hailing from Canada meant he had to grind twice as hard to be heard globally.

He did just that with the music video for Everywhere We Go. Boasting the best talent show sequence since Napoleon Dynamite, it introduced a bevy of memorable mischief makers and spotlighted the many sides of SonReal. The clip would rack up over one million views in less than a month as he received acclaim from MTV, Noisey/Vice, Earmilk, HipHopDX, and later win an MMVA for MuchFACT video of the year. He continued this visual tradition with Preach, For The Town, and Woah Nilly all from his Juno nominated, For The Town EP.

After completing a North American tour, and signing to Capitol Records, SonReal began work on his debut international release, One Long Dream. The first release from the project Can I Get A Witness was an instant success, achieving platinum status in Canada and entering the top 15 at pop radio. SonReal further promoted the single by jumping on the road as direct support for Jon Bellion’s sold out Human Condition tour, and then his own North American headlining No Warm Up Tour.

“When I started making music, all I ever wanted to do was make people laugh, make people cry, and make people feel something,” he leaves. “That’s what music did for me. That’s why I try to do different things under the same umbrella. If the listener feels emotion when listening to it, I have done my job.”

SonReal is a new school leader. With a 2014 Juno nomination, this young artist has independently put all eyes on him through consistently putting out interesting innovative material. Notorious for releasing mixtapes that have an album feel, it is easy to see why SonReal is at the forefront of not only Vancouver's hip hop scene, but the Canadian mus... more info
Submit info on this show to our admins