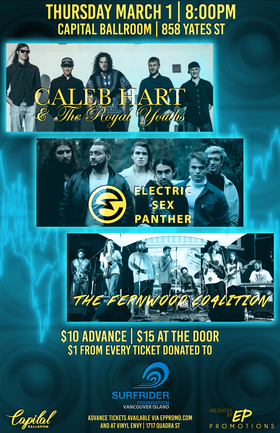 Thursday March 1 | 8:00PM
$10 Advance | $15 At the door
$1 from every ticket donated to Surfrider Vancouver Island
Tickets available online via bit.ly/CHTRYESP and in person at Vinyl Envy (1717 Quadra Street)
19+ Only

CALEB HART & THE ROYAL YOUTHS
"The sound mastered by these guys is a team effort, plainly displayed in their immaculate performances. It's the combination of heart shared by each member of the band, and a flawless synchronicity of talent, skill, and simply soul." - Jessy Savage http://www.jessysavage.com/features/caleb-hart-and-the-royal-youths-road-to-riff

"When you can switch between singing reggae to soulful R&B to sounding just like Shaggy seemlessly, you’re going to blow some minds. Just watch his cover of Shaggy and Rayvon’s ‘Angel’. It’s no wonder his set with the Royal Youth’s at Sugar Nightclub won them a performance spot at Rifflandia. Hart also capped off his year winning a Western Canadian Music Award with his other band Tasman Jude. 2017 is already starting off hot as his voice is heavily featured in Illvis Freshly’s song ‘Upside Down’ playing in rotation on The Zone for January 2017’s Band of The Month. Caleb Hart went from someone I didn’t know anything about to being a name that has been practically seen everywhere within four months. This performance for Do250’s ‘Road To Riff Contest Showcase’ is a shining example of Hart’s vocal chops and stage presence." - Magmazing Music
http://victoriamusicscene.com/category/countdown/


FERNWOOD COALITION
The Fernwood Coalition staggers onstage.
“Who are they?”, says some girl.
“I think I recognize the singer”, says some other girl.
A flautist graces the the cramped atmosphere of the low-ceilinged room with some brash overtones and a semi-sophisticated touch of vibrato. Other-girl begins to move her feet. The rag-tag band of scruffy minstrels have kicked off a tune.
“Here we are again” mutters the bass player inaudibly. The drummer cracks a smile.
The mushrooms have just begun to kick in. Drummer is pretty sure he’s hitting the snare on the “3”.
Everything’s gonna be ok..Probably.
There’s something incredibly comfortable about playing together. The coalition members have all been jamming out since high-school, many of them playing shows together since they were teenagers. Friends and friendly acquaintances beam up at them from the front of the stage. The community spirit is undeniable. It always is.

The coalition was formed a year ago, responding to the myriad engagements regularly purposed on their other band, Downtown Mischief. With a positive west-coast vibe these Canadian fellows love to HowyLaLa with you and yours.

Led by Trinidad & Tobago native Caleb Hart, The Royal Youths are a Vancouver Island reggae powerhouse. A tight, immaculate sounding band, Hart and the band have been gaining incredible momentum in just a short time, not-so-slowly taking Western Canada by storm. The love of reggae music on display during their performances is nothing short of magica... more info
Submit info on this show to our admins