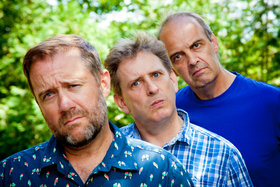 Music: Folk / Celtic / Latin / World, Pop / Rock / Indie Theatre:
The Arrogant Worms began in 1991 as a comedy troupe performing songs and sketches on Queen’s University campus radio. The early feedback was clear: lose the sketches. So the songs endured and they all remain because the band hates to throw anything out.

The songs were written to make fun of a big dumb world. Luckily, the world is dumber than ever and The Arrogant Worms (Mike McCormick, Chris Patterson and Trevor Strong) still have plenty to sing about. The shows are fast, furious and family friendly. The wit is quick, the satire is biting and the musicianship is second to none. Their appeal has earned them fans from kids to parents to grandparents to Admiral Leia.

The Arrogant Worms have sold more than 160,000 copies of their 14 albums. The band has played on three continents to crowds as large as 100,000 and were recognized in 2003 as the “Touring Act of the Year” by the Canadian Arts Presenters Association. The Worms have entertained at corporate functions, sung anthems at sporting events and emceed major festivals. Their songs are in school lesson plans, in textbooks and even played on the Space Shuttle. On earth, or in space, everyone digs these Worms.

The Arrogant Worms are Canada's best known musical comedy act. From humble beginnings on campus radio in Kingston, Ontario; they have now performed from Saint John to Victoria and Orlando to Prince Rupert. The three-man comedy troupe uses guitar, bass, great stage presence, super-tight harmonies and the sharpest of wit, The Worms are on a mission t... more info
Submit info on this show to our admins