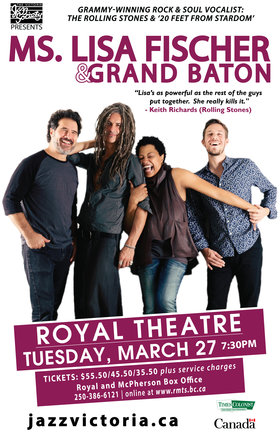 Music: Jazz / Blues
“Lisa’s as powerful as the rest of the guys put together. She really kills it.”

With her transcendent and energizing vocals, Grammy Award winning vocalist Ms. Lisa Fischer simply must be experienced live. Featured in the Oscar-winning documentary ‘20 Feet from Stardom,’ Lisa has toured with Sting, Tina Turner, Chris Botti, Chaka Khan, and Nine Inch Nails, as well as every tour of The Rolling Stones since 1989. The Guardian describes Lisa’s voice as “so big and so spine-tinglingly beautiful that on a nightly basis it does the near impossible: it steals the show from the Rolling Stones.”

In performance with Grand Baton, JC Maillard guitar, Aiden Carroll bass and Thierry Arpino drums, Lisa re-invents songs by Led Zeppelin, Amy Grant, Little Willie John, and The Rolling Stones as well as her own originals. With a genre-bending fusion of jazz, progressive rock, and psychedelic soul, with African, Middle Eastern, and Caribbean rhythms, this band’s unique sound is powerful, inventive and classic.

After decades of bringing raw soul to the stage for world famous artists, Lisa Fischer is emerging as the most inventive and heartfelt interpreter of classic rock songs working today.

The VJS is thrilled to present Ms. Lisa Fischer & Grand Baton in Victoria again (between a seven night run in Paris and two nights in Tokyo) after their knockout headlining performance at the 2015 TD Victoria International JazzFest.