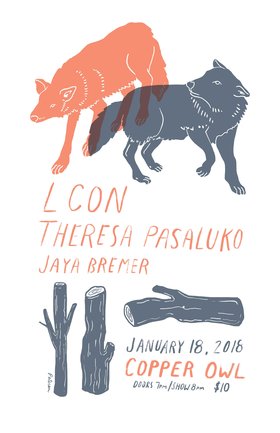 L CON is the ever-evolving avant-pop project of Toronto-based songwriter and sonic adventurer Lisa Conway. Her recordings have been described as "ethereal, minimalist, experimental, unnerving…and downright elegant" (AUX), with the Toronto Star claiming, "Conway is bound for greatness, even if she doesn’t realize it yet." Although secretly born in Victoria, this is her first official show in BC's fair capital. http://www.lconofficial.com

Fueled by emotion as raw and slicing as the bitter winds of northern B.C, Canadian singer-songwriter Theresa Pasaluko has staked her claim as an ambitious and powerful female force. From the rural landscape of Smithers to the sprawling streets of Vancouver, Pasaluko’s geographical influences channel through both her 2008 self-titled EP, and her 12-track album Sound of Town from 2010. Having honed a sound that blends her love of roots, rock and soul, the 28 year-old currently draws inspiration from her home of Victoria B.C. http://www.theresapasaluko.bandcamp.com

Jaya has been singing since before she had front teeth and that’s no exaggeration. Enchanted by female powerhouses from Billie Holiday to Wynonna Judd, her musical influences cross quite a spectrum. Picking up a guitar in high school, songwriting was instinctual-the most natural outlet imaginable. She writes about growing up on the west coast, time spent on the ocean, in the forest, her travels and the navigation of the heart.