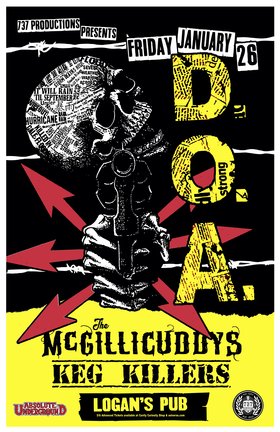 Event Archive - The Return of: D.O.A., The McGillicuddys, The Keg Killers

Music: Folk / Celtic / Latin / World, Punk / Metal / Hardcore
Punk rock legends D.O.A. from Vancouver return to Victoria for the first time in a couple years. Since their inception in 1978, this band has paved the way for a lot of the punk rock bands you see today. From the first album, Something Better Change, to the stellar, Northern Avenger, in 2008 and the newest record, Hard Rain, in 2015 D.O.A. have had something to say. They have always gone against the status quo and pushed the envelope. Several times now band leader Joe Keithley has gotten into politics, being involved with the Green Party to try and make real change in the world. Talk Minus Action Equals Zero.

Victoria's favourite long running celtic punks The McGillicuddys will be warming up the stage for D.O.A. Who doesn't love songs about Irish whiskey done with electric guitar and mandolin?

Starting off the evening will be yet another band of local legends! Yes, that's right KEG Killers will be blasting through tunes about Oak Bay, David Lynch movies and women from outer space.

This will be a sellout for sure, so when tickets go on sale, do not hesitate to purchase them!

Tickets will be available this Saturday December 16th at noon at CAVITY Curiosity Shop and online at universe.com $16 advance.

Canada’s legendary Punk Kings, who helped spread punk rock counterculture around the world, approach a momentous milestone. For nearly 25 years D.O.A. has been happily slashing away at all manner of philosophical enemies. They’ve traveled the globe almost continuously since they formed in 1978; they released their first snarling piece of vinyl,... more info
Articles: The Bobblehead Speaks!, 30 Years of D.O.A. and today

Celtic punk rock’n’roll, with lashings of mandolin, tin whistle and accordion all amped up with power chords that will transport you back to a mythical smoky pub with brawling songs of drink, hard living and hard loving. Album Notes: Under the influence of old school punk rock and traditional Celtic tunes, the McGillicuddys sound like a p... more info
Audio: Thousands Are Sailing (Bonus Pogues Cover)
Submit info on this show to our admins