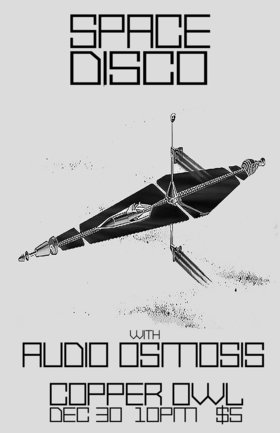 Music: Electronic / DJ
On December 30th prepare to be spaced out with CFUV 101.9 FM's Audio Osmosis as they take over the decks at the one and only Copper Owl

"Space disco is the fusion of disco music with futuristic themes, sounds and visuals, a genre that became popular in the late 1970s. The main idea behind the genre is that of an exploration of the wonders of outer space by humans, and many bands often included robotic shapes, laser illumination and computer screen sequences in their live performances. The artists themselves often dressed in a manner inspired by glam rock and somewhat futuristic fashion."

Expect the best in killer space disco from the past to the present.
http://mixes.beatport.com/mix/id/295517?just_published=1

Live on CFUV 101.9FM in Victoria every Sunday from 5-6PM. Audio Osmosis is a nondescript radio show/promoter/DJ and a functional avenue for ready made Audio experience tactics. Where to catch AO? at Cenote every 2nd and 4th Sunday of every month for #sundaypsych and at Smiths Pub every Wednesday night. more info
Submit info on this show to our admins