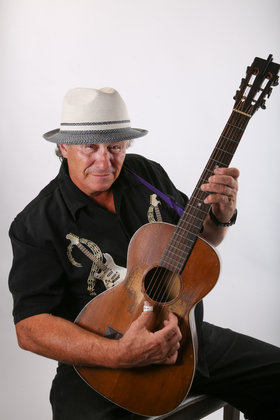 Music: Jazz / Blues
We are proud to welcome back this Juno Award Winning Canadian blues legend! Last year's show sold out so best to get your tickets early!
​
Big Dave McLean is often viewed as an unsung hero of Canadian blues and an inspiration to younger generations of musicians such as Colin James and Wide Mouth Mason. Ever since getting his start with an impromptu guitar lesson from John Hammond at the 1969 Mariposa Folk Festival, this Yorkton-born, Winnipeg-based artist has been devoted to his craft, touring relentlessly through Canada’s blues bars, folk clubs and folk and blues festivals, even when it meant supplementing his income in the early days with all manner of side jobs.
​
Along the way, there have been career highs: opening for his idol, Muddy Waters; earning two Western Canadian Music Awards, a Prairie Music Award, a Whisky Award and countless Maple Blues honours – including the Blues with Feeling (Lifetime Achievement) Award; sharing a Juno for his contribution to CBC’s Saturday Night Blues Vol. 1 album; and, most recently, garnering his third career Juno nod for his last album, “Faded but not Gone”. His most recent release, "Better The Devil You Know" was produced by Steve Dawson under the Black Hen Music label. With “Better the Devil You Know” Dave continues to set an example for new generations of musicians by constantly evolving his sound, embracing new artistic collaborations and making records that just keep getting better and better.
​
Billboard’s Larry LeBlanc once wrote that Dave “has done more to shape western Canada's blues scene than perhaps any other artist.”
​
A gifted musician and consummate entertainer, this is a show you do not want to miss!

Please note the Upstairs Lounge is a licensed restaurant, doors open at 6 pm for dinner service, the concert starts at 7:30 pm