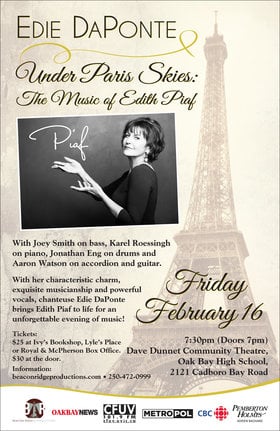 Music: Jazz / Blues, Tribute / Cover Theatre:
Music lovers will have the chance to see the incomparable Edie Daponte performing her show Under Paris Skies in Oak Bay after a sell-out show at the Mary Winspear in Sidney in 2017. She promises to make people smile, laugh and cry … though mostly smile! In 2017, Edie’s song, “Island Rain” was awarded song of the year in the Jazz category by Vancouver Island Music Awards. In 2016, Edie was nominated vocalist of the year by the same and her song “Ride the Wind” was nominated as song of the year in the Traditional Category at the International Portuguese Music Awards.
​
Under Paris Skies – La Musique de Edith Piaf is a unique show combining music and entertainment inspired by Paris. With a live four-piece band Edie will perform many of the French cabaret singer’s soulful and emotional numbers. Non Je Ne Regrette Rien; La Vie en Rose; Hymne a L’Amour; songs of enduring popularity, interwoven with Edie’s engaging style of audience-interaction, and interpretation of the French lyrics. She’ll also be mixing in some songs and stories that fit alongside Piaf’s oeuvre – inspired by a recent trip to Paris and meandering the city’s streets.
​
Channelling Piaf, with her rich timbre and captivating stage presence, Edie aims for a completely authentic experience and her experienced band will help create the atmosphere of an intimate Parisian theatre. Joining Edie are long-time collaborator Joey Smith on bass, and local favourites Karel Roessingh on piano, Jonathan Eng on drums and filling the important role of accordionist, Aaron Watson. All these talented musicians have long careers in the Vancouver Island jazz scene. You might not see Edie wearing the characteristic ‘little black dress’ that Piaf was known for – she prefers a little more flare - but she promises to deliver Piaf’s music as it was originally intended, with emotion and love.
​
Growing up in Quebec in a Portuguese family, Edie (named Edith at birth) feels Piaf has always had a role in her life, listening to scratchy vinyl recordings through her early years, despite not understanding the words in their French originals. As an adult singer Edie has witnessed again and again the strong emotional pull Piaf’s songs have on an audience.

Equally at home in an intimate lounge setting or an outdoor festival stage, Edie Daponte has established a reputation in the music scene of Vancouver Island and Western Canada as a dynamic and engaging performer. Edie brings passion, playfulness and an evident love of performance to her live shows. Vancouver island Music Awards awarded Edie with "J... more info
Videos: