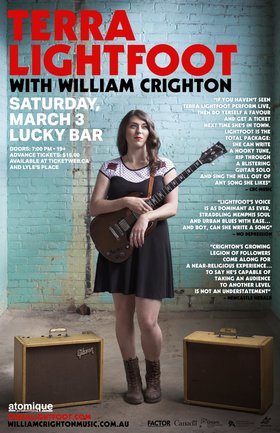 Music: Folk / Celtic / Latin / World
Whether you’re talking about her as a songwriter, guitarist or vocalist, one thing is indisputable: Hamilton’s Terra Lightfoot is a ferocious talent. Her songs tap into the raw emotion of hearts supercharged by love, lust, loneli- ness and temptation. Her playing melds expert finger-picking and distorted, hook-heavy melodies. And her elemental voice commands attention and awe, whether on slow-burning soul ballads or hard-charging rock numbers.

In writing and performing Every Time My Mind Runs Wild, Lightfoot set out to push her limits as a performer and challenge herself creatively. Where her debut was given to slower, softer songs and a subdued vibe, Lightfoot’s new album crackles with immediacy and demands attention. From the moment you put it on, the album announces Lightfoot’s arrival as a confident and natural lead performer.