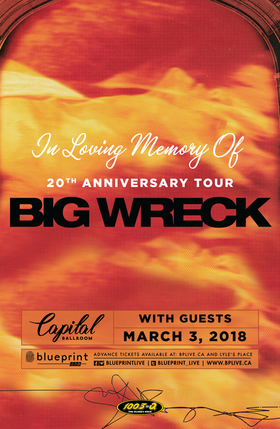 Music: Pop / Rock / Indie
Big Wreck celebrates their 20th Anniversary with the In Loving Memory Of Tour in Victoria at Capital Ballroom - Sugar Nightclub on Wednesday, March 3rd with guests to be announced - Doors at 8pm

Catch all the action on IG at @blueprintLIVE

“The end result is an album that benefits from lyrics that are at times both sorrowful and spiritual, music that is powerfully uplifting, and a band that sounds refreshed and rejuvenated.” NMC.ca “There are no shortage of guitar champions out there, but Thornley and his crew bring a renewed spirit and drive to guitar-based rock music in a... more info