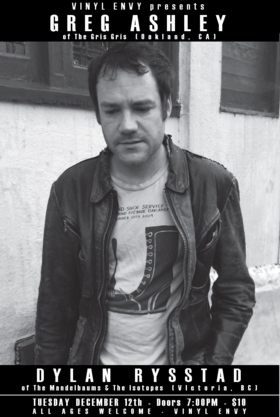 Event Archive - An Evening With: Dylan Rysstad, Greg Ashley (of The Gris Gris)

Greg Ashley (Oakland, California)
https://gregashley.bandcamp.com/
Texas-born singer/multi-instrumentalist Greg Ashley has been a fixture on the underground music scene since the late nineties. Since then he’s proven himself not only as a songwriter, singer and guitar player in bands like The Mirrors & The Gris Gris, but also as a producer/sound engineer via his Oakland-based Creamery Studio.

with Dylan Rysstad (Victoria, BC)
http://www.dylanrysstad.com/home
Local elusive singer-songwriter Dylan Rysstad has done numerous North American tours, solo and with a band, and more recently, Europe (with ISOTOPES Punk Rock Baseball Club). His band The Mandlebaums has rocked the record store before and rattled the windows!

As a solo artist he's opened for Corb Lund, Chilliwack, April Wine; and owes Bob Dylan $1800. Some of the bands he plays in, or has played in, are: The Mandlebaums, Isotopes Punk Rock Baseball Club, The Ramores, and The Jolts.

This will be a rare opportunity to see Greg Ashley perform in Victoria, so don't miss out on this one folks! ♥