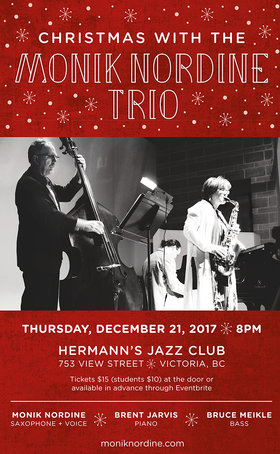 Event Archive - Christmas with the Monik Nordine Trio, Monik Nordine, Brent Javis and Bruce Meikle: www.moniknordine.com, “…facile in her execution and fluid in the spinning out of her melodic ideas.” - Rick Helzer, Jazz Improv Magazine (Vol. 2, No. 1)

Music: Jazz / Blues
The Monik Nordine Trio returns to Hermann's Jazz Club after the launch of their new CD "The Old-New Town" to play seasonal favourites and music from their new release. Joined by Brent Jarvis on piano and Bruce Meikle on bass, Monik will play alto saxophone and do a bit of singing. The new release has been reviewed favourably in DownBeat Magazine and has been warmly received on Vancouver Island and the Gulf Islands.
" ...solid performance and writing chops." — DownBeat Magazine
“…facile in her execution and fluid in the spinning out of her melodic ideas.” — Rick Helzer, Jazz Improv Magazine
"…soaring, dynamic solos…” — PQB News
Monik Nordine is a freelance saxophonist and composer in the jazz genre and has been working as a musician for 30 years. Monik performs with her own trio, with the Jon Miller Quartet and directs The Victoria Jazz Orchestra as well as having performed with Rob McConnell, Hugh Fraser and VEJI, Guido Basso, Michael Buble, and the Victoria Symphony Orchestra among others. She has also led ensembles including the jazz quartet Departure with pianist Brent Jarvis which performed in Victoria, Vancouver, Medicine Hat and Calgary as well as venues across Vancouver Island and is now busy with The Monik Nordine Trio. Monik started and ran the Salt Spring Island Jazz Festival for 3 years as well as the jazz series “Jazz at the Acme” in Nanaimo. She has recorded three albums as a leader: Not Just To But Over theMoon (1998), Departure (2010) and The Old-New Town (2017).