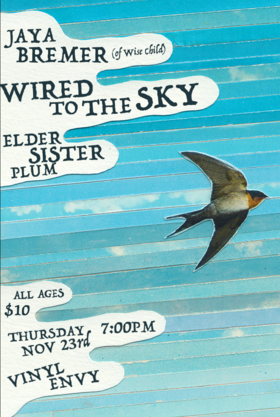 Jaya Bremer
Jaya has been singing her heart out since before she had front teeth and that's no exaggeration. Enchanted by female power houses from Ella Fitzgerald to Winona Judd, her musical influences cross quite a spectrum. She writes about growing up on the west coast, time spent on the ocean, in the forest, her travels and the careful navigation of the heart. Jaya also fronts local rock band Wise Child who are working on a brand new album~!!

Elder Sister Plum
http://eldersisterplum.com/about/
Elder Sister Plum's tunes go down smooth like a good whiskey. With just her voice and an acoustic guitar or piano, Plum delivers wistful melancholy ballads followed by groovy top-tapping tunes, moving into sombre hair-raising stories of sailors lost at sea.
After traveling and performing throughout Canada for many years, Plum has settled in Victoria, B.C., where she recently released her fifth album, At The Edge Of The Woods.

Wired To The Sky
Wired To The Sky is the newest project from Canadian songwriter, Dylan Perkons. Though his dusty baritone remains at the front and centre, the dynamic instrumental arrangements carry the listener through the heartfelt songs.