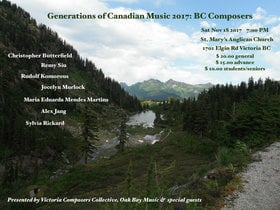 As part of a broader performance which aims to reach music from each province of the country, this November 2017 concert will feature composers who are born or resident in British Columbia, including pieces by Rudolf Komorous, Sylvia Rickard, Christopher Butterfield, Jocelyn Morlock, and emerging composers from Victoria and Vancouver.

Come celebrate Canadian classical music throughout the 20th and 21st centuries with us!

Harpist Josh Layne (1977-) offers an unforgettable and exciting concert in recital, school and community settings. Josh's intensity and focus, as well as his incredible technique and outstanding musicianship, make his playing something not to be missed. more info
Submit info on this show to our admins