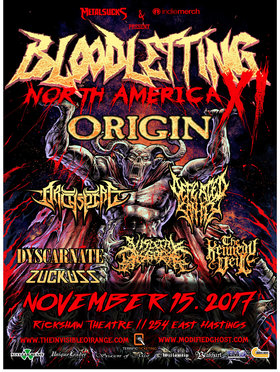 EVENT DETAILS
2017 marks the 11th year that the Bloodletting saga has unleashed its terror on crowds across the continent. The tour is presented by MetalSucks.net and IndieMerchstore to bring you the most devastating collaboration of artists in this realm. Tech metal aficionados Origin, genre bending Archspire and and Germany’s evil seeds Defeated Sanity have been invited as the tour’s heavy hitters. With announcements still underway for the remaining spots, there is no doubt that this will be an explosion of some the genre’s best.

ARCHSPIRE harold a tight live performance, where impressive speeds come grinding to a halt, and in even less time twist and contort into complex passages rife with beautiful harmonies, juxtaposed against insidious melodies. An attention to songwriting, focusing not only on technicality, but originality as well, take this sub genre and put it on it's ear. And the combination of musical backgrounds, which is apparent in much of ARCHSPIRE'S music, showing itself through catchy rhythms, interesting riffs and arrangements, and progressive passages.

DYSCARNATE have long been flying the flag for U.K. death metal all over the world. Having toured across Australia, Europe, Indonesia, Israel, Russia and more, fans can expect to see the three piece powerhouse's dominance to spread even further in the coming year with the stellar release "With All Their Might". Three men, one purpose, one sound.

VISCERAL DISGORGE From the violence-ridden bowels of Baltimore emerges VISCERAL DISGORGE vomiting forth their debut album INGESTING PUTRIDITY. Serving up 9 bloody cuts that will captivate the enthusiasts of brutality everywhere!

THE KENNEDY VEIL The last hope for humanity is The Kennedy Veil. Sent by those who must not be seen, to save a planet that is not their own, in a world of greed, hate and complacency, they come to cleanse the earth of the spreading plague; the beast known as 'BRK-DÖN' (the Breaker of Downs) to deliver us unto the golden age of 'BALAST'N'. The Kennedy Veil may be our only chance...

SUBSCRIBE to The Invisible Orange Newsletter and never miss an update.

other sites: myspace | deezer | iheart | zvooq | rdio | slacker | rhapsody | mog
One of the most intense and technical forces of the contemporary death metal world, ORIGIN, have returned to stake their claim as the leaders of metal’s new wave of extremity with their fifth studio effort entitled Entity. As expected, the death grind trio of Flores, Ryan, and Longstreth continue to churn out frantic hell paced grids of metal tor... more info

An aspiration for the unknown and the esoteric: the prime factor in the progression and evolution of organic life. In an oft tumultuous affair such as this, rarely does one reach a level of true total transformation. However, how does one account for the off chance that the organic achieves the precision of the mechanized? Only through the art of m... more info
Articles: LiveVan Review - Kill The Elite Tour (Kataklysm, Aborted, Archspire and Death Toll Rising at the Rickshaw Theatre), Mother Died Today, Archspire, First Reign and Woods of Ypres at the Biltmore Cabaret
Submit info on this show to our admins