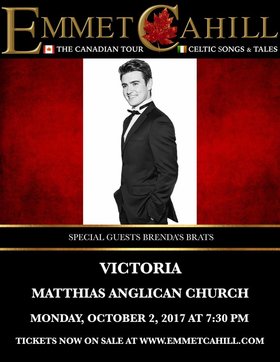 Music: Folk / Celtic / Latin / World
Sony recording artist and Celtic Thunder lead singer Emmet Cahill marks his first solo tour of Canada with a concert at St. Matthias Anglican Church in Victoria on October 2nd at 7:30 p.m. to perform songs from his debut orchestral album, “Emmet Cahill’s Ireland.” His album reached #1 on the Amazon, iTunes and “Billboard” World Music charts and offers the very best of the traditional Irish repertoire. Song selections include: "Danny Boy," "An Irish Lullaby," "When Irish Eyes are Smiling," and more. Cahill's concert also includes Broadway standards ("This is the Moment," "Music of the Night," "Bring Him Home"), nostalgic favorites ("Moon River", "Edelweiss") and gospel songs, plus an occasional operatic aria that will showcase his classical vocal training received at the Royal Irish Academy of Music.
Don’t miss an unforgettable evening of songs and tales from the Emerald Isle with Ireland’s most exciting young tenor! General admission tickets are $30 and may be purchased at the door or online. 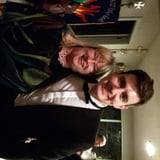