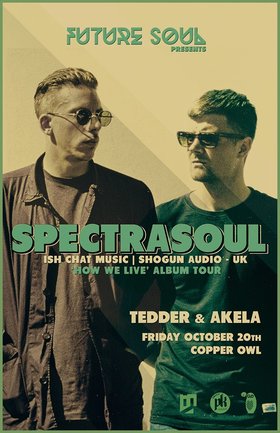 Music: Electronic / DJ
Well, it doesn't get much bigger than this! We are beyond excited to bring one of the top drum n' bass acts around, to our corner of the world. This is the tour for their 3rd studio album 'How We Live', which gets released on the same day. This should not be missed by anyone!
Future Soul residents Akela & Tedder will warm things up.
PK Sound in full effect, Dezine on the visuals.

Since their emergence in 2006, SpectraSoul have carved a truly unique position, not only in Drum & Bass, but electronic music as a whole. Having released music on only the very finest and most respected labels in the scene, from Goldie's legendary Metalheadz, to dBridge's boundary breaking Exit Records, and Kasra's ever progressive Critical Music, they went on to become vital members of Friction's irrepressible Shogun Audio imprint.

Beautifully deep and etched with groove yet powerful enough to move any dancefloor, SpectraSoul's stunning musical productions are a far cry from the soulless, synthetic rave fodder so many unfortunately associate with Drum & Bass today.
Their creative evolution has seen them incorporate such a variety of tempos and moods - bending genres in the process - yet their underlying sound remains instantly recognisable, and in many ways unique.

The breadth of their creative influences is a rarity within their peer group; taking influence not only from a unique mixture of musical genres and moments in time, but also from wider fields such as photography, art, film and beyond.

2016 saw the duo spread their wings and launch their very own label, Ish Chat Music. With the release of three EPs in twelve months, they drastically upped the frequency and diversity of their output, with experimental tracks sitting alongside straight up club music. 001 to 003 garnered wide-ranging support from Radio 1and Beats 1 and from a variety of highly respected music media outlets such as DJ Mag, MixMag, Resident Advisor.

The final quarter of 2017 will see the release of their third studio album, ‘How We Live’; the fourth release on their own imprint. The album is an exploration of the underground sonic pallette and a return to the core ideals that formed the drum and bass genre; uncompromising, energetic, experimental and danceable. The duo, in their trademark fashion, straddle the varying styles within the genre and showcase, once again, the diversity of their production capabilities.