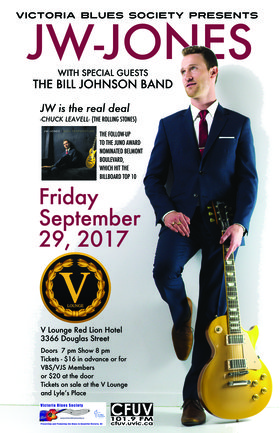 Jones has released nine albums, and performed in twenty-three countries and four continents. In 2015/2016, JW played over 100 shows per year, including being invited five times to perform alongside Buddy Guy, and twice with Woodstock legends, Canned Heat.

JW’s latest release ‘High Temperature’ was named the Hot Shot Debut on the Billboard Top 10. From the liner notes: “Acclaimed Nashville producer Colin Linden takes Jones into new territory with warm, analog-driven tones, and a wide-range of material. His evolution as a musician and vocalist shine through on this record like never before. Real songs, real playing by real people, and JW is the real deal.” – Chuck Leavell (The Rolling Stones)

Bill Johnson of Victoria BC on Vancouver Island, began playing guitar at the age of nine. Part of a musical and artistic family, he had wanted to play music like those around him. Between his uncle a fine Country and Western guitarist, and brother a Blues harmonica player, and even the neighbours, there were lots of great sounds happening around hi... more info
Audio: Fishin With Your Boots On, Baggage Blues, Cold Outside
Articles: Still Blue Reveiw, Best Of 2016, Cold Outside Reveiw
Submit info on this show to our admins