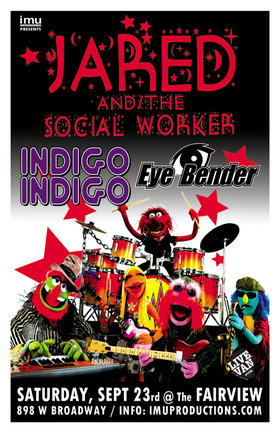 JARED AND THE SOCIAL WORKER - Like a parade on fire, Jared and the Social Worker are entertaining, captivating, heartbreaking and unforgettable. Jared and his tight 4-piece band weave brand new, original rock tunes with clever versions of eclectic covers sure to put a smile on your face. http://www.facebook.com/JATSWorker

While acting and doing commercials as a boy, Jared Fowler realized that he loved performing. Jared began his music career on the banjo and then 3 years later traded up to the acoustic rhythm guitar because he thought it would make him more popular with the ladies. When he was 19, Jared traveled with his guitar across America, playing in every stat... more info

other sites:
Eye Bender is an original Rock band. Musical styles stems from the great era of Rock from the late 60s to the mid 80s. Though the band performs as a 5 piece, the image of the band features only the key members - Betty J. on vocals and Victor Yong on guitars. more info
Submit info on this show to our admins