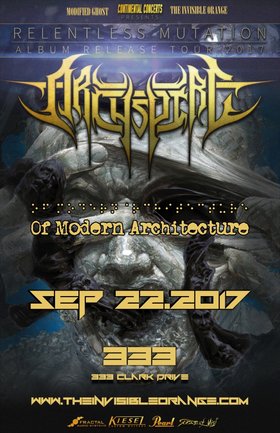 Archspire cast their deadly spell on September 22 at Club 33 rising from the depths of their time in the studio with their next studio release Relentless Mutation. The group released two new tracks from the album over the summer “Involuntary Doppleganger” and “Human Murmuration” which has proven to be the band’s most impressive demonstration of speed, complexity and technicality to date.

ARCHSPIRE harold a tight live performance, where impressive speeds come grinding to a halt, and in even less time twist and contort into complex passages rife with beautiful harmonies, juxtaposed against insidious melodies. An attention to songwriting, focusing not only on technicality, but originality as well, take this sub genre and put it on it's ear. And the combination of musical backgrounds, which is apparent in much of ARCHSPIRE'S music, showing itself through catchy rhythms, interesting riffs and arrangements, and progressive passages.

An aspiration for the unknown and the esoteric: the prime factor in the progression and evolution of organic life. In an oft tumultuous affair such as this, rarely does one reach a level of true total transformation. However, how does one account for the off chance that the organic achieves the precision of the mechanized? Only through the art of m... more info
Articles: LiveVan Review - Kill The Elite Tour (Kataklysm, Aborted, Archspire and Death Toll Rising at the Rickshaw Theatre), Mother Died Today, Archspire, First Reign and Woods of Ypres at the Biltmore Cabaret
Submit info on this show to our admins