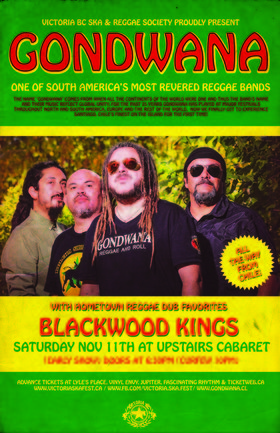 Formed in 1987, the band maintains an acclaimed trajectory which includes multiplatinum albums and numerous presentations in the most successful and well- known festivals across America (as an example of their massive impact across the continent, the band has performed at Cali Roots Reggae Festival, and Reggae on the River in California, Rock al Parque in Bogotá, Vive Latino in Mexico, Pepsi Music in Buenos Aires, Cosquin Rock in Cordoba, Quito Fest in Ecuador and various appearances in the prestigious Festival de Vina del Mar in Chile).

They'll be joined by Victoria's favourite reggae/dub rockers - Blackwood Kings. Blackwood Kings have grown to become a fixture in the Island's ska and reggae scene and will be representing Canada in this first time Chilean to Canadian connection on the Island.