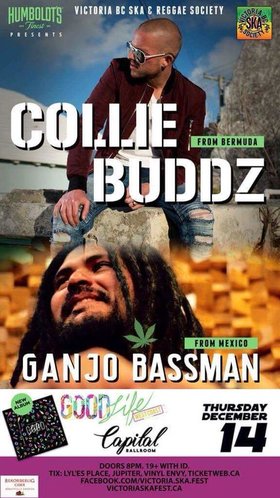 Music: Hip Hop / Rap, Reggae / Ska / Dub
It's been six years since Bermudan reggae sensation graced the Island with his signature brand of reggae, dancehall and hip hop. COLLIE BUDDZ exploded on the reggae charts with his first self-titled album Collie Buddz that included hits such as "Blind to You" and "Mamacita." Since that time he has collaborated with most of the who's who of the reggae scene worldwide both in the recording studio and through his live shows.

This past May of 2017 Collie Buddz released his most recent album Good Life which he says was his first fully independently released album where he was "100% hands on." The album was produced in collaboration with his good friend "Supa Dups" who was responsible for some of his former hits on Collie Buddz as well as recent hits involving Drake and Rihanna ((Drake "Controlla",Drake ft. Rihanna"Too Good)

Good Life" as an album is a reflection of Collie Buddz's life the last 10 years. Ultimately it is about perspective, perseverance and working towards a solution.

Colin Harper aka Collie Buddz says, "I have been blessed with the best fans in the world who have supported me for years and patiently waiting for new music. I'm really excited to unveil this project to them and am already working on the next one. "

Island reggae veterans Ganjo Bassman will be opening the show.

Ganjo Bassman originally from Sayulita, Mexico has been proud to call Vancouver Island his home for the past four years. Previous to settling on the Island Ganjo played with various Mexican reggae bands until he decided to create his own band called Ganjo Bassman. He created a mini EP called Rock- Reggae-Hop and toured several continents showcasing it in countries such as England, Italy, France and Spain. Along the way he opened for bands such as The Wailers, Ky-Mani Marley, Matisyahu, Gondwana and Alborosie.

His most recent show was opening for Gondwana at The Red Room in Vancouver November 12th, 2017.

Rounding out the bill will be DJ All Good - National DMC Champion. He will be keeping the party going strong with your favourite dancehall, hip hop and reggae before and in between sets!

Born in New Orleans, raised on the isle of Bermuda with intermittent stays in urban Toronto, Colin Harper is not an easy youth to pin down geographically. His musical alter ego Collie Buddz however, is one of the most firmly grounded voices you may ever encounter. Incorporating influences from hip-hop to soca, Collie’s music nevertheless has a ro... more info

After years of playing with a number of bands in his home Mexico, the man called Ganjo formed his own project, GANJO BASSMAN, to expand on the unique sounds he heard in his head. A singer-songwriter and producer, the talented Ganjo starting creating music he refers to as “Rock-reggae-hop.” It's a blend of unique, shifting basslines, grunge guit... more info
Submit info on this show to our admins