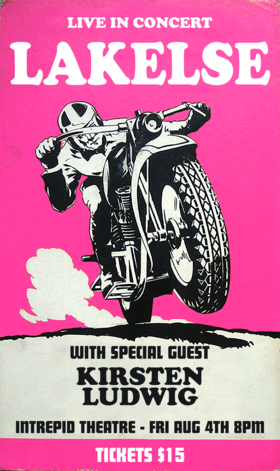 Tickets $15
available at the door, online here https://www.eventbrite.ca/e/lakelse-and-kirsten-ludwig-at-the-intrepid-theatre-tickets-36074364395, or shoot us a message and we will put some aside for you!

Lakelse (pronounced lake-else) is an independent and alternative rock band based out of Victoria, BC. Formed in late 2014 by singer/guitarist Nash Park, bassist Dylan Powell, guitarist Graham Schibli and percussionist Kevin Wiebe. Hoping to incite self-reflection and a collective celebration Lakelse’s sound uses a combination of heavy slow moving guitar riffs layered with grandiose synthesizer, and honest, soaring lyrics. Intending to blend dramatic intimacy with explosive dynamics Lakelse’s sound puts the listener in a place of both comfort and unease. These intentions are ever present in their first official release, The Prospect of the Dream EP.

Although blooming from the suburbs of Calgary, AB, Kirsten Ludwig belongs to no set of roads and dwells in transition. A nomad at heart, Ludwig finds true solace in her quiet ambition, gentle voice, and mellotron-induced thoughts. With a soft demeanour and heavy mind, Kirsten Ludwig achieves simultaneous vulnerability, strength, grace, and madness.

Only having started professionally pursuing music in 2014, Ludwig has managed to develop a detailed list of notable events in quite a short amount of time. Starting out, she was given the opportunity to record an album, which would be her first, through the Rawlco 10K20 Grant in Alberta. Ludwig released 'Drifting' [2014] independently - an album heavily influenced by the likes of Kathleen Edwards and Volcano Choir. 'Drifting' was toured mainly in Western Canada and received airtime on CBC 'All Points West' and select college radio stations across Canada.

Kirsten Ludwig released her sophomore album 'Honest Tracks' [2016], with the support of FACTOR, - fresh-faced and determined to establish herself as not only a songwriter, but a producer and visionary. Journeying quite far from her last release, Ludwig managed to find an unusual approach that allowed her to weave stirring melodies into her cryptic, yet genuine lyrics. Proceeding the release of ‘Honest Tracks’, Ludwig set out on a solo cross-Canada house show tour with Dan Mangan’s Madic Records, giving her the necessary knowledge to then independently book and tour Germany, The Netherlands, Austria, and Switzerland for 6 weeks in the fall of 2016 with fellow songstress Alexandria Maillot.

Approaching 2017, Ludwig is set to record and release an album in the latter half of the year - rumoured to focus mainly on portraying the album as a reflection of the live performance she has worked on cultivating in her year of touring.