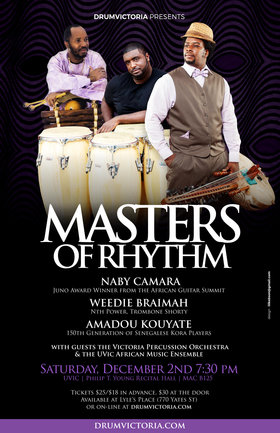 Amadou Kouyate
Amadou Kouyate is the 150th generation of the Kouyate lineage and has studied and performed Manding music since the age of three years old. Amadou is a dynamic djembe and koutiro drummer. He also plays the 21-string kora, which he learned first with his father, Djimo Kouyate and other master Diali --oral historians/musicians-- of Manding tradition in West Africa. Amadou has dedicated his life to the task of become an ambassador of African culture to the world. The catalyst for such a responsibility is the passion he has for reconnecting those of the African Diasporas to one another. His repertoire ranges from traditional songs from the 13th century to contemporary original compositions incorporating blues and jazz riffs.

Weedie Braimah
Born in Ghana, Weedie Braimah had his first drum before he turned 2, and hasn't let the drums off his sight since! He has studied with every African master drummer of note - Mor Thiam, Baba Camara, Mamady Keita, just to name a few. A maverick performer of the highest caliber, Braimah has an almost insatiable knack to draw the entire audience into his grove, zigzagging through Africa on a breathtaking rhythmic roller coaster. Weedie performs with Trombone Shorty, Bokanté and the Nth Power.

Naby Camara
Naby Camara is the Juno award-winning percussionist from the African Guitar Summit, Alpha Yaya Diallo, Fatala and the legendary “Les Ballets Africains” (the National Ensemble of the Republic of Guinea). He is one of the best balafon players in the world, and is considered groundbreaking in his ability to mix traditional balafon with many other styles of music.