Zoubi is moving to Toronto in September! So, this is the farewell show and Zoubi...

Zoubi is moving to Toronto in September! So, this is the farewell show and Zoubi and the Sea will be headlining for their first time ever!!

ZOUBI AND THE SEA
http://zoubiarros.com/videos

Light hearted, pop rock from the 1920's. Zoubi is a naturally magnetic performer. As a songwriter she possesses an endearingly genuine creative spark that catches and holds your attention. Her lyrics are rich with visuals and her vocals flutter with a soft vibrato that is intriguing and distinct.
In 2015, Zoubi released her debut EP, Tumble and together with musician, Devarrow, she embarked on an EP release tour to Saskatchewan and back. Returning to her home in Victoria, BC, Zoubi and the Sea was formed and in 2016 they performed Song and Surf, Rock of the Woods, Tall Tree, Fernfest and Rifflandia Festival. On stage, the ensemble is cohesive and playful, melding a Tegan and Sara sound with jazz undertones and hip-hop, funk rhythm.

Devarrow is the moniker of Graham Ereaux, a singer-songwriter who blends simple folk with sophisticated pop to create music which reflects an isolated upbringing in Moncton, New Brunswick and a subsequent half decade of traveling. In 2015, Devarrow self-released The Great Escape, a collection of eleven songs written in a leaky-roofed apartment while living in Vancouver for a winter. To support the release, Devarrow toured Canada extensively as a one-man-band in 2015 and 2016, focusing on creating an energetic, captivating and intimate live show performed in the raconteur style. Gaining recognition in the maritimes - including an ECMA nomination - Devarrow moved back East to Halifax, Nova Scotia where he now resides. With a refined focus on lyrics and arrangement, Devarrow will be releasing a new EP and LP in 2017.

Vic Horvath is a walk under the glowing embers in the wood stove sky. A mouth that mutters magic and breathes sinful strings and cackling feathers. This performer is the kind found in dim lit bars crowded with whisky and slurred romances.

Zoubi and the Sea

Folk Garage from Victoria BC 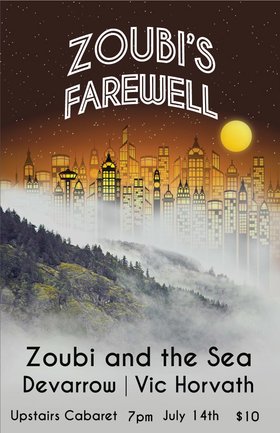