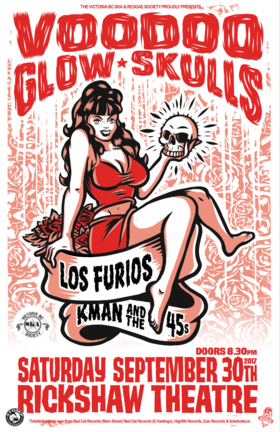 Formed in 1988 VGS built their band from starting off playing in backyard parties and clubs. Those small gatherings soon grew to sold out shows throughout their state and around the USA overall. In 1993 the band signed to Epitaph Records and completed a tour that brought them to Europe, Asia, Australia, South America and Mexico.

VGS signed to Victory Records after their time with Epitaph and have continued touring the world ever since. That said, the band recently announced this could be their last tour.

Check them out while you still have the chance!

VOODOO GLOW SKULLS have repeatedly labeled their unique fusion of punk, metal, ska and Latino swing as “California street music.” So this time around, they decided to make it official. 2007's Southern California Street Music, is their first release since 2004 and the latest installment in their epic career. VOODOO GLOW SKULLS have been prais... more info
Audio: Down for Life

K-Man & The 45s, where Ska meets Rock and Roll. This Canadian 5 piece band from downtown Montreal is as heavily influenced by old school ska as it is with classic rock n roll. With a fantastic horn section playing catchy melodic lines and blazing solos over an energetic rhythm section, they switch naturally from ska to rock and punk, with surf soun... more info
Submit info on this show to our admins