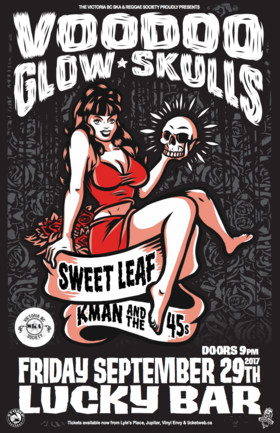 Music: Funk / R&B, Pop / Rock / Indie, Punk / Metal / Hardcore, Reggae / Ska / Dub
It's been almost a decade since the Voodoo Glow Skulls from Riverside, California came to British Columbia with their brand of high-energy punk and ska. The last time they came was back in 2010 when they opened for The Mighty Mighty Bosstones for Victoria's 10th Anniversary Ska Festival at the Victoria Curling Club.

The band has been active and touring since then and are now on an upswing and excited to return to Vancouver Island.

They'll be joined by Victoria's favourite ska sweethearts Sweetleaf (or sometimes we call them Sweetloave) + Montreal's KMAN & the 45s.

Tickets are going to go quickly for this one so make sure you get them when they go on sale on Monday, July 10th on ticketweb.ca. They'll be available at Lyle's Place, Vinyl Envy & Jupiter shortly afterwards.

VOODOO GLOW SKULLS have repeatedly labeled their unique fusion of punk, metal, ska and Latino swing as “California street music.” So this time around, they decided to make it official. 2007's Southern California Street Music, is their first release since 2004 and the latest installment in their epic career. VOODOO GLOW SKULLS have been prais... more info
Audio: Down for Life

K-Man & The 45s, where Ska meets Rock and Roll. This Canadian 5 piece band from downtown Montreal is as heavily influenced by old school ska as it is with classic rock n roll. With a fantastic horn section playing catchy melodic lines and blazing solos over an energetic rhythm section, they switch naturally from ska to rock and punk, with surf soun... more info
Submit info on this show to our admins