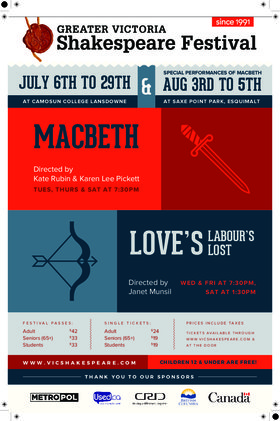 Music: Theatre:
Come check out the Greater Victoria Shakespeare Festival, performing from July 6th-29th, outdoors on the grounds of Camosun College, Lansdowne Campus! The festival is family friendly, with children 12 and under being admitted for free! This year we are performing Macbeth and Love's Labour's Lost. For the first time ever, we will also be having special performances (of Macbeth only), at Saxe Point Park in Esquimalt, from August 3rd-5th.

Macbeth
The order of law is upended as a popular leader lets fate guide him to power on a wave of deception and murder in this haunting story of ambition and its fiendish consequences. Witness the lengths one man will go to for the sake of his own pride, falling prey to a soul-corroding guilt as he desperately tries to cling to the defiled crown.
400 years ago, during a time of great political transition and upheaval, Shakespeare gave us a vehicle to pick up a mirror and examine the chaos and destruction that could be created by a tyrannical ruler.

Love's Labour's Lost
The King and three friends make a monastic vow to live without women for three years – then the Princess of France comes to town with her witty, pretty retinue. What could possibly go wrong? Shakespeare’s sparkling comedy mischievously suggests that the study of the opposite sex is, in fact, the highest of all academic endeavours.