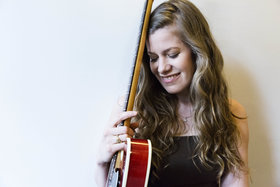 Music: Folk / Celtic / Latin / World
Originally from Quebec, Aude Ray grew up singing. Her music brought her to Western Canada 15 years ago, where she flourished as a singer songwriter. She lives now inWhistler, British Columbia.


After her first studio produced album Sirene, she wanted to bring a live feel, with guitar, vocal harmonies and piano. Be my Home is an amalgam of Aude Ray's work from the past year, inspired by thoughts and poetry, sounds and alchemy. Recorded Live-off-the-floor, the music brings undertones of Jazz mixed with Folk influences.

The Montreal Folk scene comes out in Aude Ray's personality, style and lyrics and her melodies bring freshness from the coastal mountains of British Columbia.