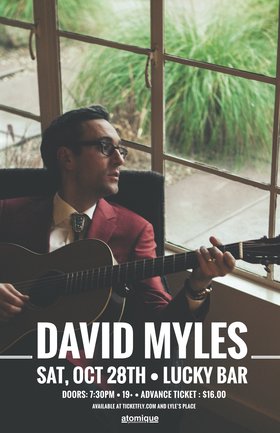 Music: Folk / Celtic / Latin / World, Pop / Rock / Indie
Real Love, celebrates the sound of the ’50’s infused with the classic David Myles style that has captivated fans across the country, and around the world. Myles will release Real Love September 15th, a month before he begins a cross-country Canadian tour that will take him from Victoria, British Columbia all the way home to Halifax, Nova Scotia.

All this new music injected with rhythm and groove will certainly be shakin’ up Myles’ already enthralling live performances. Even more toe-tapping, more head-nodding, and yes—more hip-swivelling—is coming to the David Myles Road Show with Real Love added to the band’s repertoire. It was written to achieve maximum entertainment, and is guaranteed to floor crowds across the country this fall.

Myles is thrilled to once again be taking his music across Canada, and looking forward to sharing, as he describes, “a record I’ve always wanted to make….an upbeat, danceable, fun record that harkens back to the early days of rock n roll”.

Singer-songwriter David Myles' second full-length album, "Things Have Changed", is the latest in a long line of musical achievements. At age eleven, he was a finalist in the Connaught Street School lip synch contest for his version of "Heartbreak Hotel". Ten years later, Myles played with a blues band in a Chinese soccer stadium. The show was t... more info
Submit info on this show to our admins