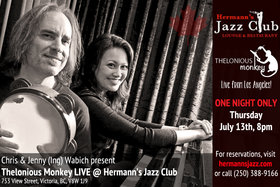 Music: Jazz / Blues
"What can I say to the masses about Thelonious Monkey? What a crazy ass show at the Baked Potato, Lankershim. Chris "Drummer of the Century" Wabich, the beautiful Jenny Ing on keys, vocals, and sax (modern day Karen Carpenter, Minnie Ripperton) playing the 2016-not 2015 versions of future jazz. Alternative rock jazz and blues; my potato had to wait. Paid $15.00 for the thing, to sit while I was amazed of the sound I was hearing. Jenny, Chris and the band were so terrific and off the Canada tour, when I last heard them. The[lonious] Monkey music is so obscure, clear founded. Yoko and Lennon I know for a fact would be sitting in my chair, at [the] edge of their seat. Terrific is an understatement, catch their next gig; find them on: creativedefensemusic.com."