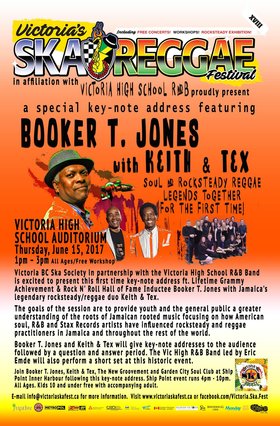 The goals of the session are to provide youth and the general public a greater understanding of the roots of Jamaican rooted music focusing on how American soul & R&B and Stax Records artists have influenced rocksteady and reggae practitioners in Jamaica and throughout the rest of the world.

Booker T. Jones and Keith & Tex will give key-note addresses to the audience followed by a question and answer period. The Vic High R&B Band led by Eric Emde will also perform a short set at this historic event.

It can be argued that it was Booker T. Jones who set the cast for modern soul music and is largely responsible for its rise and enduring popularity. On classic Stax hits like “Green Onions,” “Hang ‘Em High,” “Time Is Tight,” and “Melting Pot” the Rock and Roll Hall of Fame inductee, Musicians Hall of Fame inductee and GRAMMY Lifet... more info
Audio: Space City, Representing Memphis
Videos:

Booker T. Jones with The Victoria BC Ska Society: Interview

Keith Rowe and Philip “Tex” Dixon were two suburban Kingston kids who wanted nothing more than to make ska music. Originally two members of a five-person vocal group, the lads were turned down by Jamaica’s top producers of the late 60s, Coxsone Dodd, Prince Buster, and Duke Reid. Dejected, the other three vocalists quit, but Keith and Tex stu... more info
Audio: Don't Look Back, What Kind of Fool
Videos:

This is a remarkable and unique High School R&B band. In 1992,Their visionary music director Eric began to develop the concept of an R&B band for inclusion in the Victoria High School music curriculum to replace the stage band which had been the educational standard for over 25 years. more info
Submit info on this show to our admins