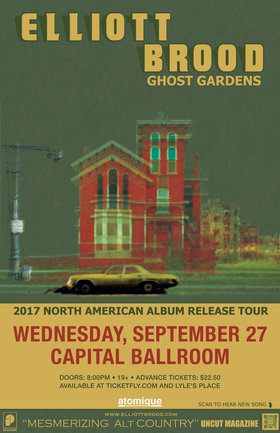 Music: Country / Bluegrass / Rockabilly, Pop / Rock / Indie
For their fifth album, Elliott Brood wanted to break things. 2008's Mountain Meadows was shortlisted for the Polaris Prize, and the band's last record, Days Into Years, won a 2011 Juno award for roots album of the year. Now was the time to smash the precedents, break the mould. To withdraw to a farmhouse in Bath, Ontario, hammering out nine songs in two weeks.
For the first time, Elliott Brood decided to work with an outside producer: Ian Blurton, who has helped make roaring records for the Weakerthans, Skydiggers and Cursed. And for the first time, the group's two songwriters decided to mine the bare histories of their own lives: penning verses about the ends of relationships and the tests of adulthood, long drives, childhood retreating in a rear-view mirror. "Work and Love will make a man out of you," the Constantines sang; and so here is Elliott Brood's Work and Love, their most personal album to date, the sound of a grown-up band searching their hearts for all they've lost and gained.