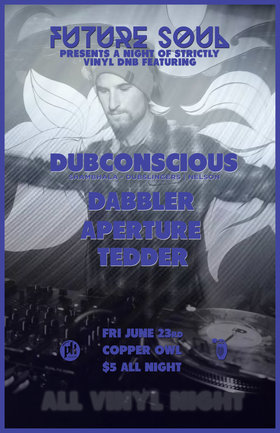 Music: Electronic / DJ
For those not heading up to Port Renfrew, we've got a special ALL VINYL NIGHT planned with some of BC's finest selectors! DUBCONSCIOUS is coming all the way from Nelson with a bag full of records. DABBLER, APERTURE & TEDDER will dust off some vinyl as well. We'll keep it cheap all night, so come down, get drunk and listen to some really good drum n' bass!

Dubconscious has come to represent both the east and the western coast of Canada. Born in Toronto and raised on the jungle / drum’n’bass sounds permeating the city in the late 90s & early 2000s, he developed a taste for hard beats drenched in reggae vibes. 2004 brought a big move across the country to the city of Victoria, which was nurturing a fledgling breaks and jungle scene – by the end of his first year of University, he had bought his first set of Technics and the seed was planted. Bouncing back and forth between Toronto and Victoria for the next three years of school presented plenty of opportunities to play different music to new crowds, adding reggae & dancehall to his repertoire, as well dubstep – in its infancy at this point. After school the move was made back east, joining up with the Dubslingers crew in Toronto, while they were holding down Canada’s longest running dubstep weekly - Dubslingers Wednesdays at Thymeless.

Having established a name for himself in Toronto’s competitive scene, he headed west once more, this time settling in Nelson, BC. After spending two productive years in the area immersing himself in both the great outdoors & the underground party scene, he's moved on further west to Vancouver, where he continues to DJ all across the board - dropping sets jam packed with a mash of many forms of urban & modern bass music at a wide selection of venues across the city, the province, and the country on a regular basis.

Appearing in nearly every major city in Canada, and sharing the stage with a wide and varied spectrum of headliners - from Beenie Man and Barrington Levy, to Andy C, Shy FX and Dillinja to The Roots, Mixmaster Mike and Blockhead, to Gramatik , Dub FX, Glitch Mob and Beats Antique, to Bicep and Kastle, to Salva, Clicks & Whistles and the Gaslamp Killer to Truth, Plastician and Rusko - he's proven his versatility many times over, across an array of arenas. He's also appeared at numerous music festivals including BC's Shambhala (5x), Bass Coast (2x), Diversity, Motion Notion, Loki and the BC Ska Fest, WEMF and Harvest Festival in Ontario, and the Dragon Festival in Granada, Spain. He has been curating a Sunday night weekly at The Keefer Bar in Vancouver for over two years, and was also running an all-vinyl reggae & dancehall weekly, Wax Wednesdays at the Waldorf - the poster for which was featured in the music video for Major Lazer & Busy Signal's "Bumaye."