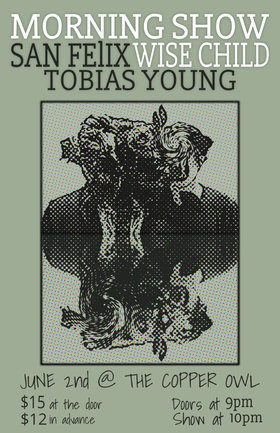 Morning Show
An alt-rock project based out of Vancouver, Canada. They make music that is honest while keeping their tongues firmly planted in their cheeks.
https://soundcloud.com/morningshowmusic/sets/prom-theme

San Felix
If Modest Mouse and the Talking Heads had a fist fight, this band would be the bruises; formed from a host of other Victoria-area acts, San Felix is a sinuous blend of sand-strewn guitar, mirage-conjuring synth and a hook-heavy rhythm section
https://soundcloud.com/sanfelixband/sets/tropic-of-self-preview

The members of San Felix had been wandering around Victoria aimlessly until the Summer of 2013, at which point they stumbled in to each other and began to make music. Rumour has it they operate as a hive mind, which explains the cohesive harmonies, flowing transitions from alt-folk to post-punk, and their tendency to blink in unison. The six-piece,... more info

Victoria BC's indie-rock band Wise Child pulls together a dreamy combination of technical, melodic and honest music that reaches deep. With a touch of shoegaze, surf and pop nostalgia, chiming guitar hooks overlie soaring, washed-out rhythm guitar and synth. Wise Child's music will resonate with lovers of Land of Talk, Alvvays, and The War on Drugs... more info
Submit info on this show to our admins