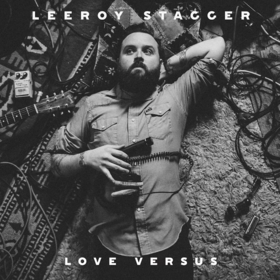 Music: Pop / Rock / Indie
I am delighted to once again welcome Leeroy Stagger and his band, The Rebeltone Sound, this time to the Warehouse! He has delighted many, including those at Sugar as recent as April 22nd and has shared the stage with:Steve Earle, Pixies, Modest Mouse, and Evan Dando!

This all ages event (although liquor will be sold) will support the non-profit Soap For Hope [see below]. Tickets are $15 advance and $20 at the door; with all ticket sales and swag proceeds going to the artists. The seating is limited (warn me in advance if you want assurance) so come for the doors at 6:30pm, although this affords room for dancing - which I guarantee will happen. There may be a food truck onsite and cd's are a must, so bring some extra money; I will let people know prior to the event. http://www.disasteraid.ca
*** SOAP FOR HOPE *** is a local initiative in Victoria, BC, Canada. We collect gently used or unused soap and hygiene products from the hotel and accommodation industry that would otherwise be discarded. We reprocess these items to redistribute to those in need in our community and abroad as part of our disaster aid kits. In doing so, our program is not only diverting hundreds of thousands of plastic product bottles from landfills but also fulfilling a local and international need for hygiene products, helping people stay healthy and dignified. Last year we served 26 local shelters and serviced 16 countries

It’s been said before that love is a battlefield, and on his latest album Love Versus, Leeroy Stagger comes well armed. His ever-evolving fusion of roots, rock and pop reaches new heights on Love Versus, resulting in 10 tracks that confirm his status as one of Canada’s best contemporary singer/songwriters. What is most striking about Love Versus overall is the wisdom at the foundation of each track, and indeed, for anyone who has followed Stagger’s career to this point, it should be apparent that this is the album he’s been destined to make. Since first making his mark on the Canadian independent music scene at the turn of this century, Leeroy Stagger has toured the world, both on his own and with the likes of Steve Earle, Pixies, Modest Mouse and Evan Dando. After almost two decades of consistent output, Stagger certainly does have the respect of both his peers and Canada’s music industry tastemakers. However, the addition of Love Versus to his (ahem) staggering body of work opens a new chapter, promising to reach many more ears.

Quotes
"A little Steve Earle, a little John Prine, a little Bruce Springsteen and whole lot of his own heart and soul make up Canadian alt / country / folk / rock minstrel Leeroy Stagger’s music.”
- Cash Box Canada (Dream It All Away)

“It’s weird how the good thing that we sometimes pursue relentlessly because we want it so bad, can also be so bad for the soul. Ah, the irony of loving it to death and killing ourselves in the process. Stagger couldn’t have painted a more complete of picture of living the dream.”
- Beatroute (Dream It All Away)

"There has always been a swagger about Stagger, a slightly cocky self-confidence that’s actually quite endearing. His sound and vocals have a somewhat loose and ragged feel that brings Paul Westerberg to mind, and there’s an open and honest feel to his unaffected voice. This is arguably his best work yet.”
- Exclaim (Radiant Land)

“There are few people you feel you get to know through their music more than Stagger.”
- The Calgary Herald (Dream It All Away)

“(Stagger)’s uncompromisingly honest, and all the more powerful for it, and twinned with the wonderfully evocative, haunting, and eclectic music within, Depression River is as mighty as the Mississippi.”
– All Music (Depression River)
Love Versus is produced by Colin Stewart (Black Mountain, Dan Mangan) and features Pete Thomas of the Attractions