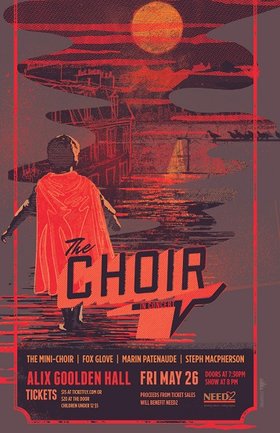 The Choir: http://www.thechoiryyj.com
Victoria’s The Choir is a non-auditioned, community choir that sings all-original arrangements of pop, folk and indie music. What started as a small project based out of Larsen Music in early 2013 turned big in no time: 100 great people who love to sing their hearts out! The Choir has had a string of very fun and successful concerts, and performances at Rifflandia 2014 through 2106, and the 2015 Campbell Bay Music Festival. They've taken the stage with Rae Spoon, Hank Pine, Adam Cohen, Kathryn Calder, Pharis and Jason Romero, Choir!Choir!Choir!, Aidan Knight and more. The Choir is directed by Marc Jenkins and accompanied by Erin Gray.

Fox Glove: http://www.foxglovemusic.ca
Not unlike the poisonous yet medicinal herbaceous perennial of its shared name, Victoria BC’s Fox Glove blooms a wealth of complex chemistry and mysterious musical beauty. Through intricate harmony, three singers push and pull on the strings of the heart, weaving dark and light powers upon their listeners. Fox Glove is a band with a knack for captivating audiences with charm and pushing back with tension, all while instilling musical prowess throughout their performance. Renn Madeleine Bibeau, Claire Butterfield, and Chelsea Kanstrup have widely diverse voices and ranges, but together they create a unified blend that has been compared to that of bands such as the Staves. (More here: https://www.foxglovemusic.ca/about)

Marin Patenaude: http://www.marinpatenaude.com
Marin was raised in a house full of music and siblings in the small northern town of Horsefly, British Columbia. Much like the von Trapps, Marin and her sisters sang three-part harmony with their father and spent a large portion of their childhood touring festivals as the Patenaude Family. She spent many years bending her will under a whip-cracking opera trainer, resulting in many tears and three consecutive years with the highest-ranking Royal Conservatory exam scores in British Columbia. A voice like an angel with a soul too gritty for the classical world, she picked up a guitar and turned to writing as a source of counsel during the grey Vancouver winters, dabbling with songs about politics and environmental issues but with age has matured an unparalleled truth and honesty in writing about love. Sometimes we want to say something and don’t know how. Marin can sing it. (More here: http://www.marinpatenaude.com/about/)

Steph MacPherson: http://www.stephmacpherson.com
Making music since she started making noise, Steph Macpherson's passion for music and love of lexicons allow her to invite you into a world of clever yet relatable imagery using her hauntingly beautiful vocals and a tone which is only her own.
Some have described her as a splice of Stevie Nicks, Sarah Harmer and Jeff Tweedy rolled into one musical entity, with a touch of Dolly Parton-esque vibrato, and Feist-like charm.

Fox Glove is an all-female trio based in Victoria BC that brings together elements of folk and alt pop to create a genre they like to call “Fox Pop.” Renn Madeleine Bibeau, Claire Butterfield, and Chelsea Kanstrup have very different voices and ranges, but together they create a unified blend that has been compared to that of bands like the Sta... more info

Vocalist and guitarist Marin Patenaude has been singing, studying, and performing since she was three years old. Influenced by Joni Mitchell and Bonnie Raitt, she sings of heartbreaking blues and cheap whiskey. more info

We’re folks from Victoria, BC who sing original arrangements of pop, folk and indie music. Before we were three ensembles (The Choir, The Chorus and the Mini-Choir), we were a motley group of people who gathered in local music shop to sing well-known songs for fun. (Still our first love.) In those early days, we had no idea that so many of our fr... more info
Articles: THE CHOIR IN CONCERT WITH KATHRYN CALDER, The Choir Marks Its Third Year With Calder Collaboration
Videos: 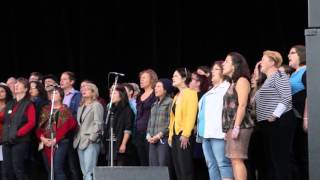